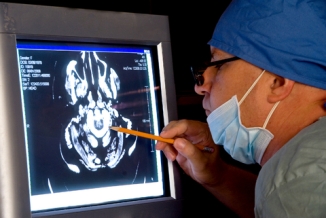 Brain injury and brain diseases are frequently associated with memory loss. In many cases, the memory loss is short-term. However, in more severe in brain diseases that are progressive, long-term memory is also affected

Stress and Memory Loss: Stress can cause memory loss and memory loss can cause stress. Research is pointing to the powerful effects stress can have on brain strutures such as the hippocampus.

What are Sports Concussions

What is a Non Verbal Learning Disability

What are Cognitive Disorders?

Alzheimer's Disease (AD) is a brain injury that is the most common late life dementia. AD currently is estimated to affect 4.5 million Americans. It accounts for one-half of all dementias. I usually occurs later in life but can occur before age 50.

AD is evident by severe memory loss for recent events or short-term memory loss. Despite what is commonly thought, the earliest signs are not memory loss. Rather, the person has trouble with regulating their behavior, and new problem-solving. There is no cure of AD. As the disease progresses more independence and daily life functions are lost. Tragically, death will occur from the illness.

Traumatic brain injury (TBI) is a major condition that is associated with memory loss. TBI can be mild, moderate or severe. TBI is complex because it can affect many areas of the brain. It can be "pervasive" brain injury or more "focal" (a specific area).

The areas of the brain, including memory areas, that are affected depends on the nature of the injury (e.g. penetrating injury like a gunshot, blunt head trauma, or violent movement of the brain with the skull). About 1.2 million TBI's occur in the United States each year.

Stroke or Cerebral Vascular Accident (CVA) is another brain injury that is a major cause of memory loss. A CVA is often called a "brain attack". CVA can be ischemic or hemorrhagic.

Ischemic strokes are cause when an object restricts blood flow to a certain part of the brain. This can be permanent or temporary (mini-stroke). This type of stroke occurs about 85% of the time.

IMPORTANT: Any sign of stroke (weakness on one side of the body, speech & vision problems, confusion, facial droop) is a medical emergency. Call 911. Lives and brain function can be saved when the person gets to the hospital as soon as possible (especially within the first 2-3 hours).

A Hemorrhagic CVA occurs when a blood vessel in the brain breaks causing blood to damage surround brain tissue. This type of stroke occurs approximately 15% of the time.

What is Vascular Dementia?

Go to Causes of Memory Loss for more information on memory definitions.

An Aneurysm is an unusual widening or ballooning of a portion of an artery due to weakness in the wall of the blood vessel. This can occur in different parts of the body but regarding memory loss we are concerned about aneurysms that occur in the brain.

A medical emergency occurs when an aneurysm ruptures or breaks. When this occurs in the brain, depending on the site of the rupture and location, brain tissue can be permanently injured. Memory loss can occur when this tissue damage is associated with parts of the brain involved in memory.

A cerebral Arteriovenous Malformation (AVM) is an abnormal connection between the arteries and veins in the brain. These misconnections usually form before birth. Less than 1% of the population is affected by an AVM in the brain.

Like a CVA if the AVM breaks the blood will cause injury to surrounding tissue and potential memory loss.

Most hemorrhages occur in people ages 15 to 20, but they can also occur later in life. If discovered, and depending upon the location, AVM's can be repaired before they break.

I have examined a number of people with AVM's and AVM's that have ruptured. Obviously, this circumstance causes much emotional distress and may contribute to behavior change.

Frontaltemporal Dementia (FTD) unlike AD affects personality and speech. Memory loss varies and often comes about due to poor attention.

As FTD progresses or 5 to 10 years and the person becomes very emotional, may not edit what they say, and usually cannot speak prior to death.

Delirium is a serious medical condition in which the person is in a state of confusion. Delirium is often, but not always short-lived. It is more common in the elderly with rapid onset and fluctuating course. For more about delirium see:

Parkinson's Disease (PD) is a brain disease that may cause memory loss for up to 33% of those with the disorder. It leads to shaking (tremors) and difficulty with walking, movement, and coordination. It also causes emotional problems like depression in some people.

PD is prevalent in about 1% of people over 60 years of age. It is caused by death of dopamine-containing cells in the substantia nigra, an area in the middle of the brain.

Go To Alcohol Abuse for More Information on this Topic

Brain injury is caused by severe deficiency of thiamine due to malnutrition from long-term alcohol use. 84% of those with Alcoholic Dementia develop Alcoholic Korsakoff (AK) syndrome. This cause severe memory loss for new information.

Go to Memory Vitamins for a discussion of Thiamine.

Brain Tumors may clearly present a danger to memory. Depending upon the site of the tumor or the structures it affects memory loss will be severe or hardly noticeable. Not all brain tumors are life-threatening and many are not cancerous. Accurate diagnosis and appropriate treatment of this type of brain injury are critical.

Lupus can be a factor in brain injury and memory loss which may come and go. The mechanisms involved with memory problems are not full understood. Various parts of the body such as the skin, joints, blood and kidneys can be affected by Lupus. Tragically this is a chronic inflammatory disease.

Depression has long been associated with memory loss and can result in depression dementia. More often then not depression causing significant memory problems is seen in the elderly. It is important to note if the memory loss is a symptom rather than a cause of memory loss.

Thyroid problems can also be responsible for memory loss. Thyroid disease can effect weight and mood as well. At this time, neuroscientists believe that memory can be affected in two ways.

Thyroid disorders affect metabolism and thus can disturb mental processing of information into memory. Second, a hormone known as T4 has been linked to dementia. This hormone is deficient in Thyroid disorders and may cause memory loss.

Diabetes may also cause memory loss. Diabetes can injure the blood vessels that supply blood to the brain. Thus, diabetes can be a cause of Vascular Dementia (VD) described above. Good nutrition including more fiber, protein and calcium in your diet can help prevent memory loss. Exercise is critical.

What about simple decline in memory as we get older?

The National Institutes of Health defines Mild Cognitive Impairmentalso known as MCI as, "the stage between normal forgetfulness due to aging and the development of dementia."

For more information about how Brain Injury and Brain Disease cause memory loss consider these resources:

The New Executive Brain: Frontal Lobes in a Complex World by Elkhonon Goldberg.